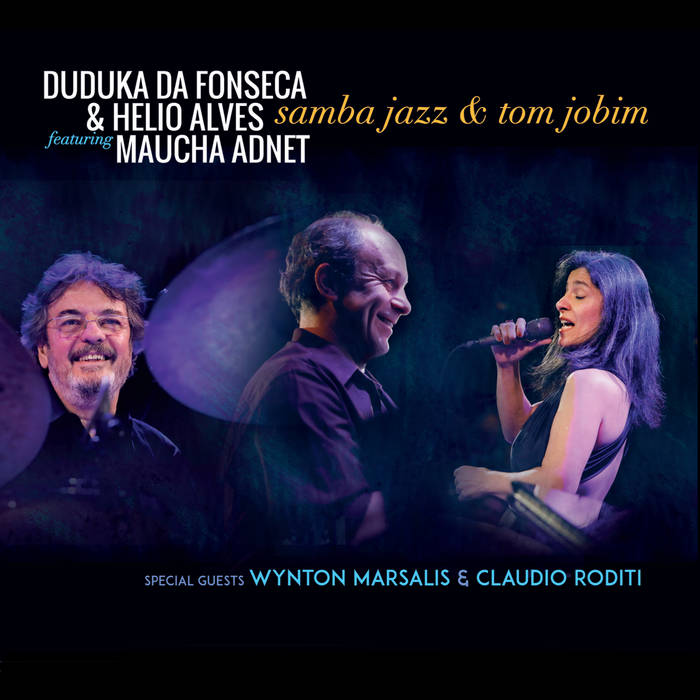 Tom Jobim and João Gilberto’s partnership provided one of the most incredible musical contributions to the musical world. In 1958, the first Bossa Nova album, Chega de Saudade, was recorded by Gilberto, featuring arrangements by Jobim. American Jazz musicians, including Dizzy Gillespie, Charlie Byrd, Keter Betts and Herbie Mann, went to Brasil around that time and fell in love with Brazilian music. They brought several Bossa Nova albums to the United States. Charlie Byrd was the one who introduced Stan Getz to the music of Jobim and Gilberto. Bossa Nova was a great influence to American Jazz from then on.

Jobim’s legacy has lived on through his admirers, followers and apprentices. Bossa Nova and the Brazilian jazz tradition continue to flourish, led by the likes of drummer Duduka Da Fonseca and pianist Helio Alves. With the addition of the great vocalist Maucha Adnet, the friends have assembled a program of music highlighting the beauty of the Brazilian Jazz music that they have performed all over the world. Their new recording, Samba Jazz & Tom Jobim, was recorded to spread their passion even further.

Though Da Fonseca and Alves come from different parts of Brazil (Rio de Janeiro and Sao Paulo, respectively), they both grew up with the sounds of popular Brazilian music and Bossa Nova in their ears. It was upon hearing jazz as teenagers that they decided to pursue the American born genre as their passion. Both would eventually land in New York City to become enmeshed in Gotham’s jazz world.

Beginning in 2007 at Dizzy’s Club Coca-Cola in New York, they began to perform a program of music called “Samba Jazz and the Music of Jobim” with the singer Maucha Adnet, who was a member of Jobim’s ensemble during the last ten years of his life. The trio has toured the world with the program and has developed an incredible empathy.

Originally from Rio de Janeiro, Adnet began her musical career as a member of vocal group Céu da Boca before joining Jobim’s last ensemble, Banda Nova, from 1984 to 1994. She has maintained a busy career as a solo artist and expert on Brazilian song, playing with legends like Dorival Caymmi, Chico Buarque, Caetano Veloso, Charlie Byrd, Gil Goldstein and Randy Brecker.

The recording begins with Claudio Roditi’s dancing “Gemini Man,” featuring lovely turns from Lubambo and the composer himself as a special guest. Da Fonseca’s seductive “Alana” is an intriguing mid-tempo piece with a feel that throws in some off-kilter percussion segments. Alves’s “Untitled” slows down the pace with a lovely piano led ballad which builds and builds, while Jobim’s “Pato Preto” is done with a delicate but steady baião rhythm drive with Adnet introducing herself in a most pleasing fashion.

Led in by wistful guitar, Jobim and Aloysio de Oliveira’s classic “Dindi” is beautifully rendered in an enticing Bossa Nova groove. Swirling soprano sax and piano introduce Jobim and Luiz Bonfá’s mellifluous “A Correnteza” and there is a stirring darkness in the group’s take on Mario Adnet’s moving “Pedra Bonita Da Gavea. Alves’s insistent “Helium” is played only by the piano trio and shows the rhythm section’s real dynamism.

Duduka Da Fonseca and Helio Alves have been leaders in the development and promotion of Brazilian musical forms where they intersect with jazz music. Their recording, Samba Jazz & Tom Jobim, showcases these brilliant musicians along with their extremely talented friends, most notably vocalist Maucha Adnet, on an incredibly moving journey through Brazilian song tinted by a jazz lens.

Bandcamp Daily  your guide to the world of Bandcamp